Sunny Leone has very successfully carved her niche in Bollywood. Apart from being a popular actress, Sunny is also a doting mother and a loving wife. The actress often makes sure she spends quality time with her husband and kids.

We recently got hold of some pictures of the actress where she can be seen with her with her little family. Sunny stepped out with Daniel, Nisha and her twin bundle of joys Asher and Noah and was snapped by the paparazzi.

While Daniel looked dapper as ever, Sunny looked like an absolute chic in her casual attire. Noah, Asher and Nisha all looked cute as a button in their family outing.

Sunny and Daniel adopted Nisha from Latur district of Maharashtra and had Noah and Asher through surrogacy. 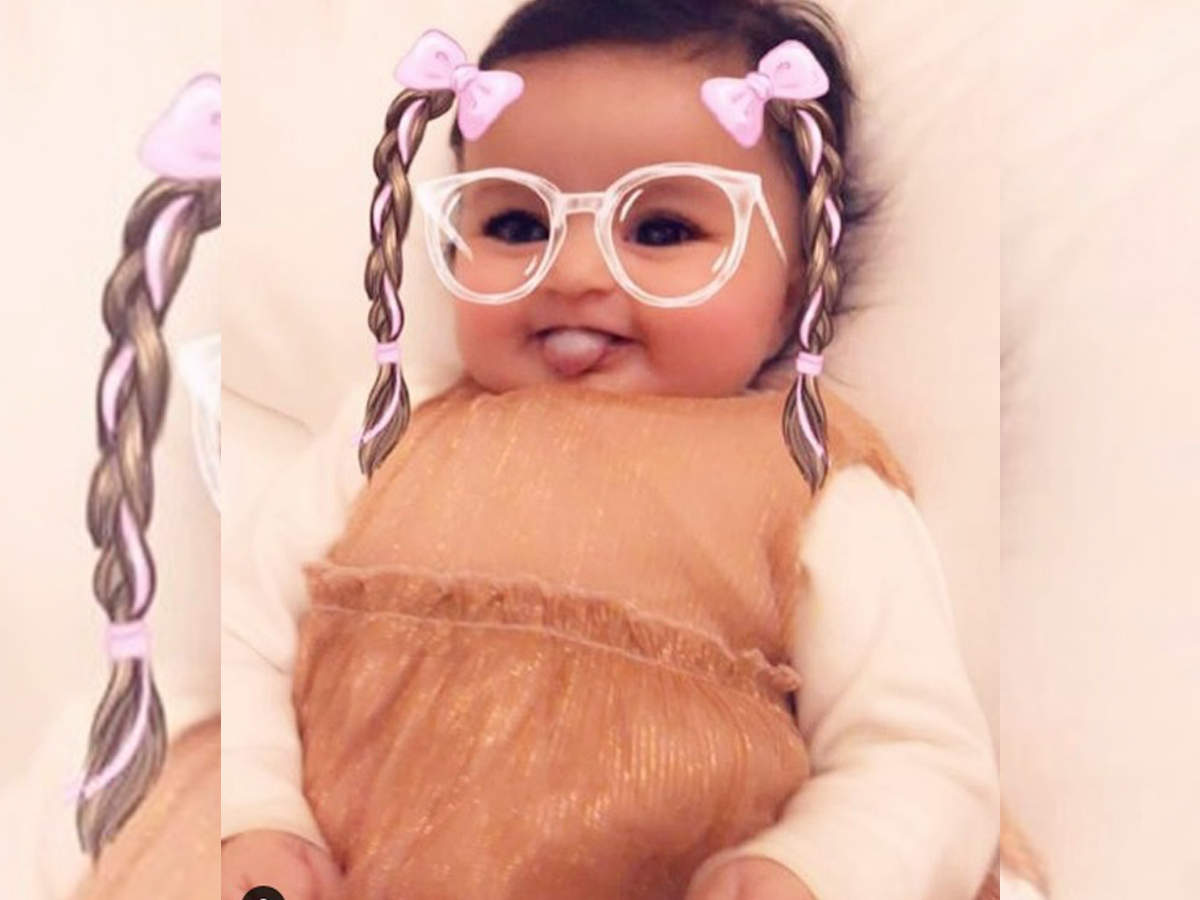 Neil Nitin Mukesh and his wife Rukmini became proud parents to a baby girl last year and ever since the little angel has both of them wrapped around her little fingers. The actor is most often seen sharing pictures of his bundle of joy and it is simply endearing.

Neil recently shared an adorable edited picture of baby Nurvi and it is too cute to handle. Dressed in a beige and brown coloured attire, she looks cute as a button. The picture has been edited by adding nerdy glasses and piggy tails to the little angel.

He captioned the post as, ‘Early learner. This is what happens when she spends too much time with her mom. #snapchat👻 #dadsgirl’

On the work front, Neil will next be seen in ‘Bypass Road’ which also reportedly stars Adah Sharma, Gul Panag and Rajit Kapur.

3/273​Photos: Taimur Ali Khan and Inaaya Naumi Kemmu look adorable as they play around with each other 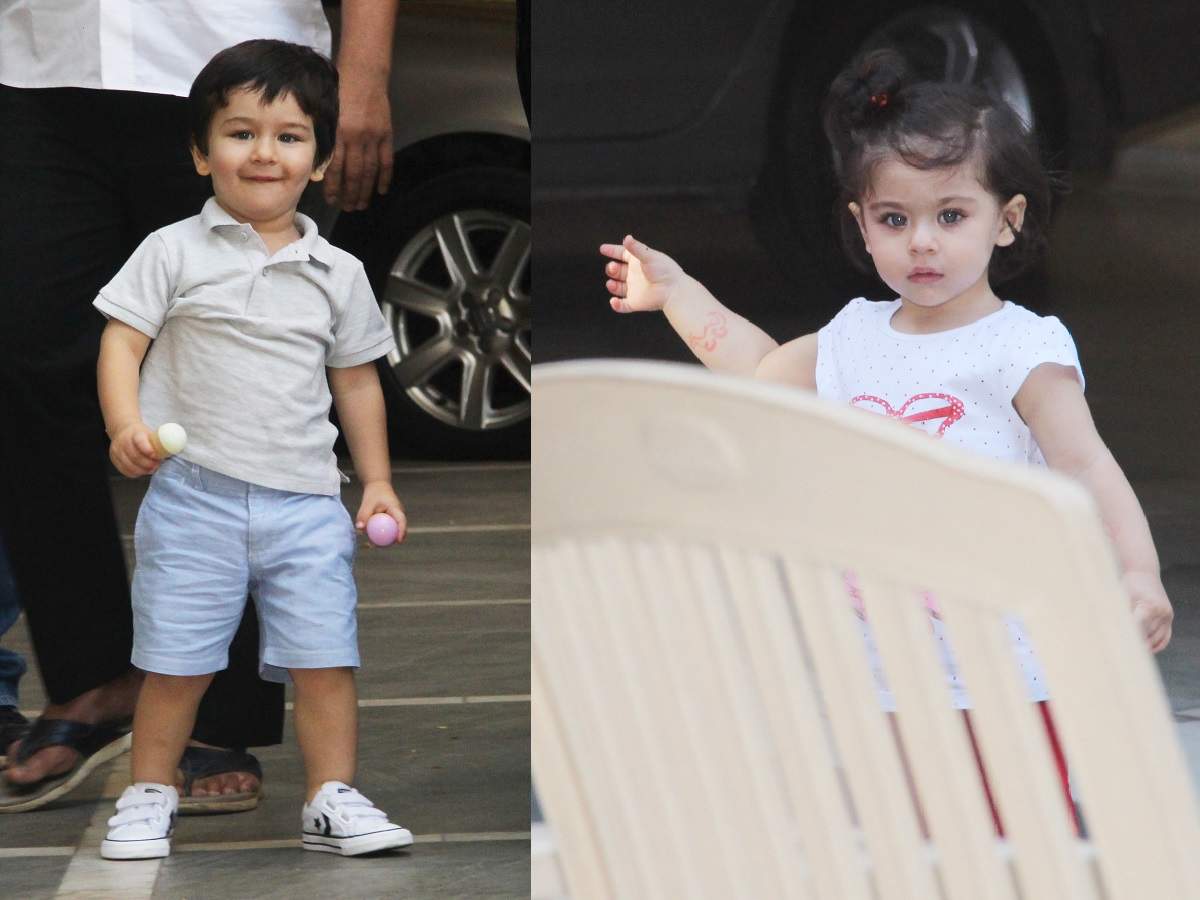 Saif Ali Khan – Kareena Kapoor Khan’s son Taimur Ali Khan and his cousin sister Inaaya Naumi Kemmu, daughter of Kunal Kemmu – Soha Ali Khan have a huge fan following all over the internet. Whenever pictures of the duo surface online, they take over the internet by storm.

Today, the Taimur and Inaaya really seem to be in a jovial mood. They were spotted jumping and laughing around with their caretakers. Tim was in a white t-shirt and blue shorts paired with white sneakers while Inaaya looked adorable in a white tee and red pants 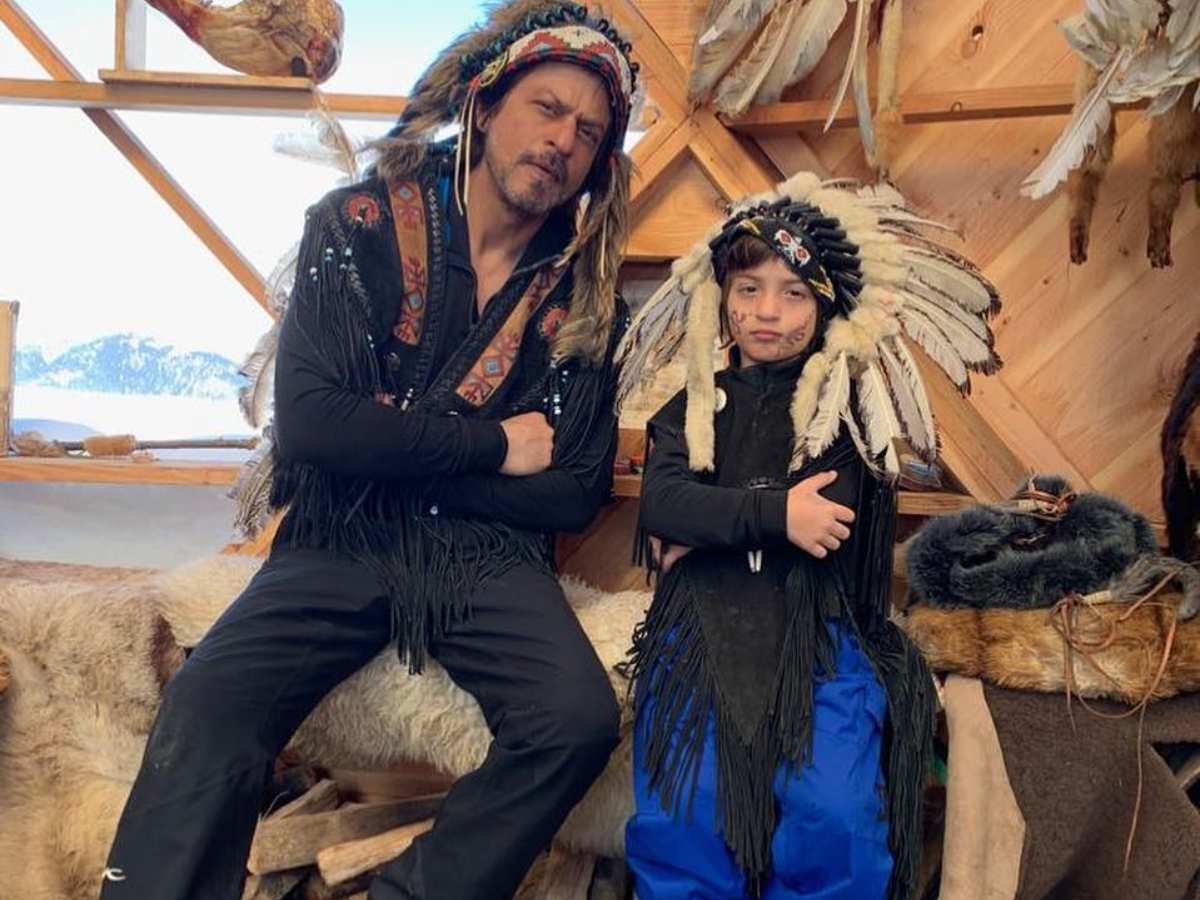 The internet is going crazy after Gauri Khan dropped a new picture of King of Bollywood Shah Rukh Khan and son AbRam Khan. The actor who was last seen in the film ‘Zero’ always loves to spend time with his family and playing with his youngest son is always favourite to him. People can’t ever stop crushing on the pictures of AbRam Khan, who just like any other star kid rules the internet.

Twinning in an all-black look, the father-son duo of Shah Rukh Khan and AbRam Khan are seen dressed up in Native American setup. Donning a feather headgear and paintings on face, both the father and the son strike a similar pose and the little munchkin highlights his pout. Sharing the picture, Gauri Khan captioned, “Courchevel. The winter playground.”

Earlier today, SRK and AbRam were spotted together at the Mumbai airport as they returned after enjoying a vacay in London. The little munchkin was seen trying to evade the paparazzi by hiding his face with the help of a soft toy which he was carrying. 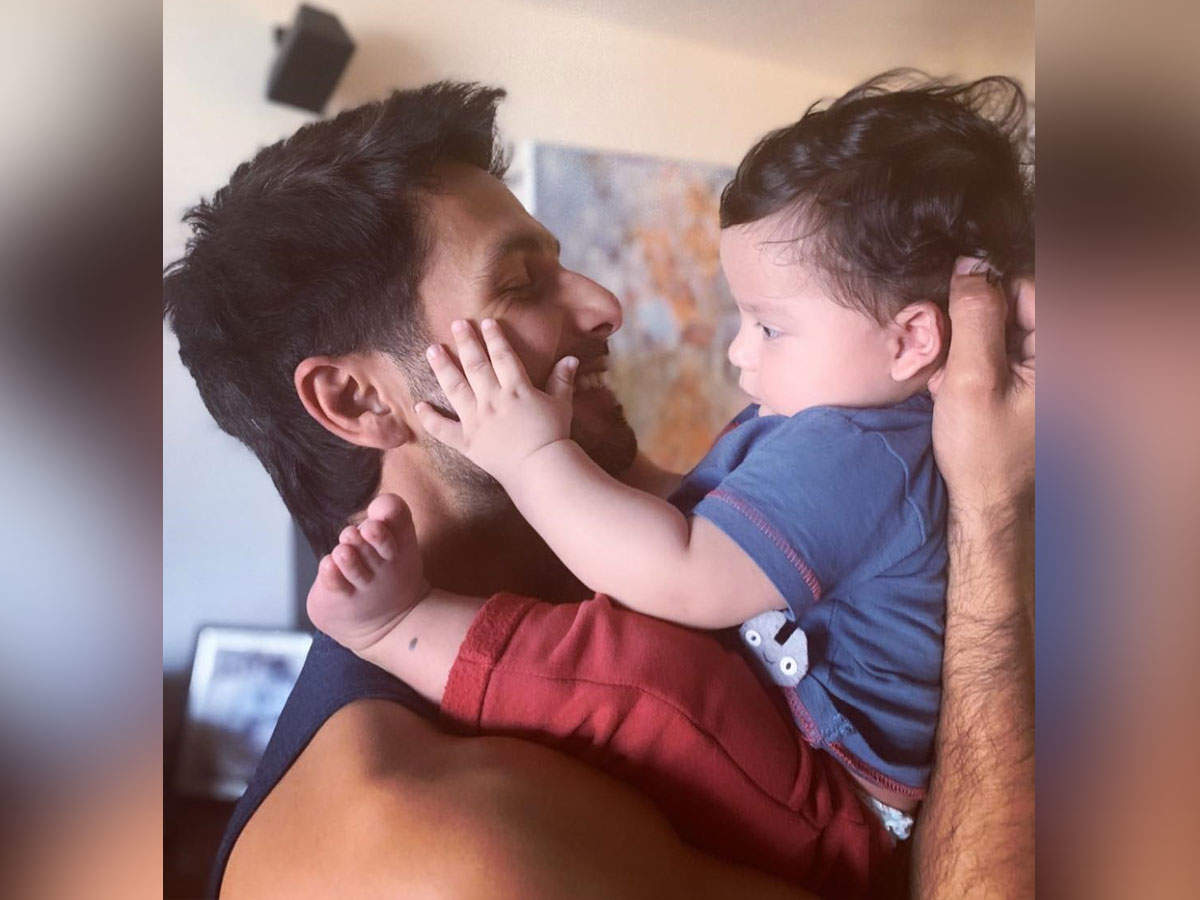 The clicks from the play dates of Shahid Kapoor and daughter Misha were always very awe-inspiring and thus when the actor became a father for the second time to a baby boy Zain Kapoor, fans were eagerly waiting to get a glimpse of the father-son fun time. Taking to his social media handle, Shahid Kapoor ends the long wait today and posts an utterly adorable picture of him sharing a cute moment with son Zain Kapoor.

While posting the pic, he wrote, “The Sun!” Well, there’s no denial in the fact that a son is nothing less than a beam of light to father and the caption is well justified. Further, in the photo, Shahid Kapoor can be seen donning an affectionate smile as his son or as he calls him his ‘sun’ caress his face, creating a picture perfect moment. 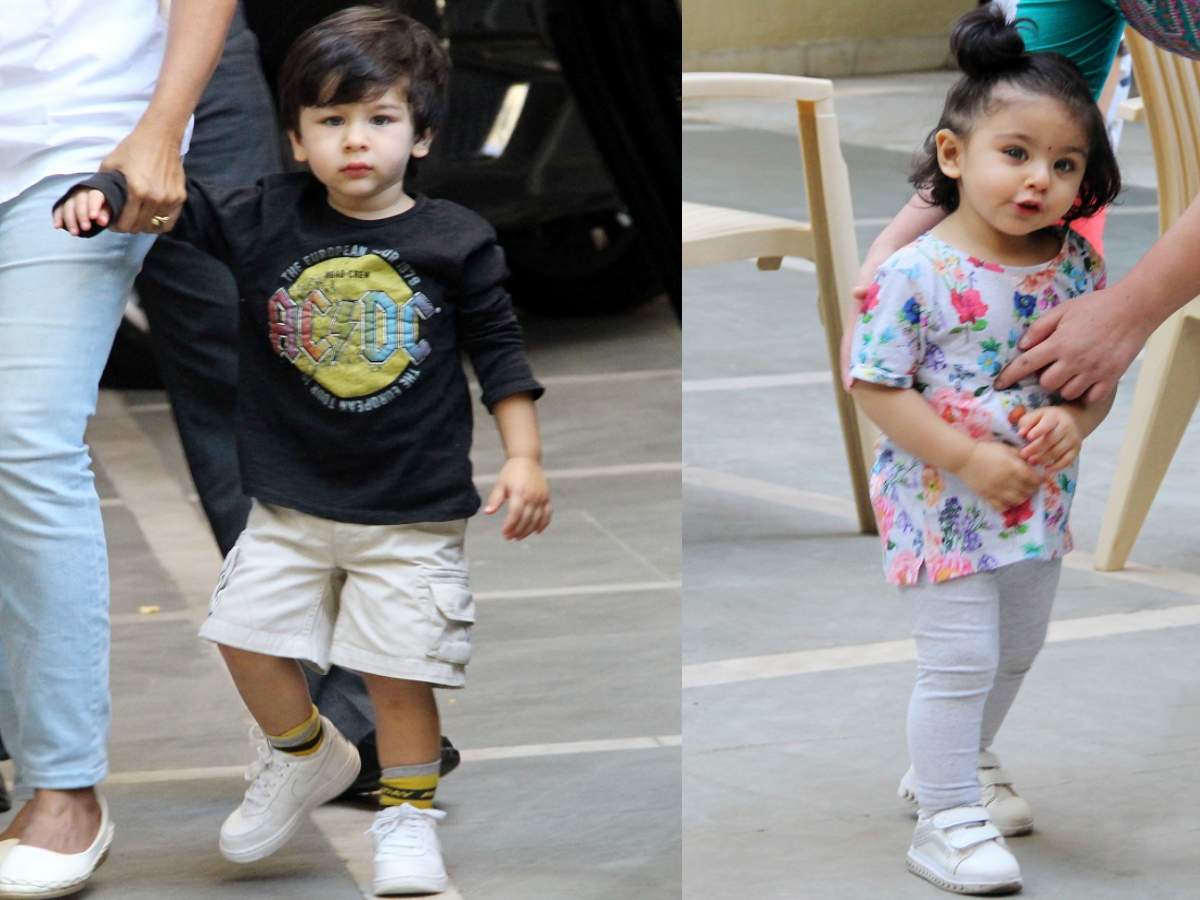 Saif Ali Khan – Kareena Kapoor Khan and Kunal Kemmu – Soha Ali Khan’s kids Taimur Ali Khan and Inaaya Naumi are the internet sensations of the country. They have a huge fan following and are no less than celebrities.

And today, in the evening, the paparazzi’s favourite kids have been snapped again. As the duo left their playschool in Mumbai, the cameramen captured the sweet smiles on camera. Taimur was wearing a black t-shirt and beige shorts while Inaaya looked cute as a button in a floral top paired with grey jeggings.

Taimur and his cousin Inaaya flash their happy smiles whenever they are together. 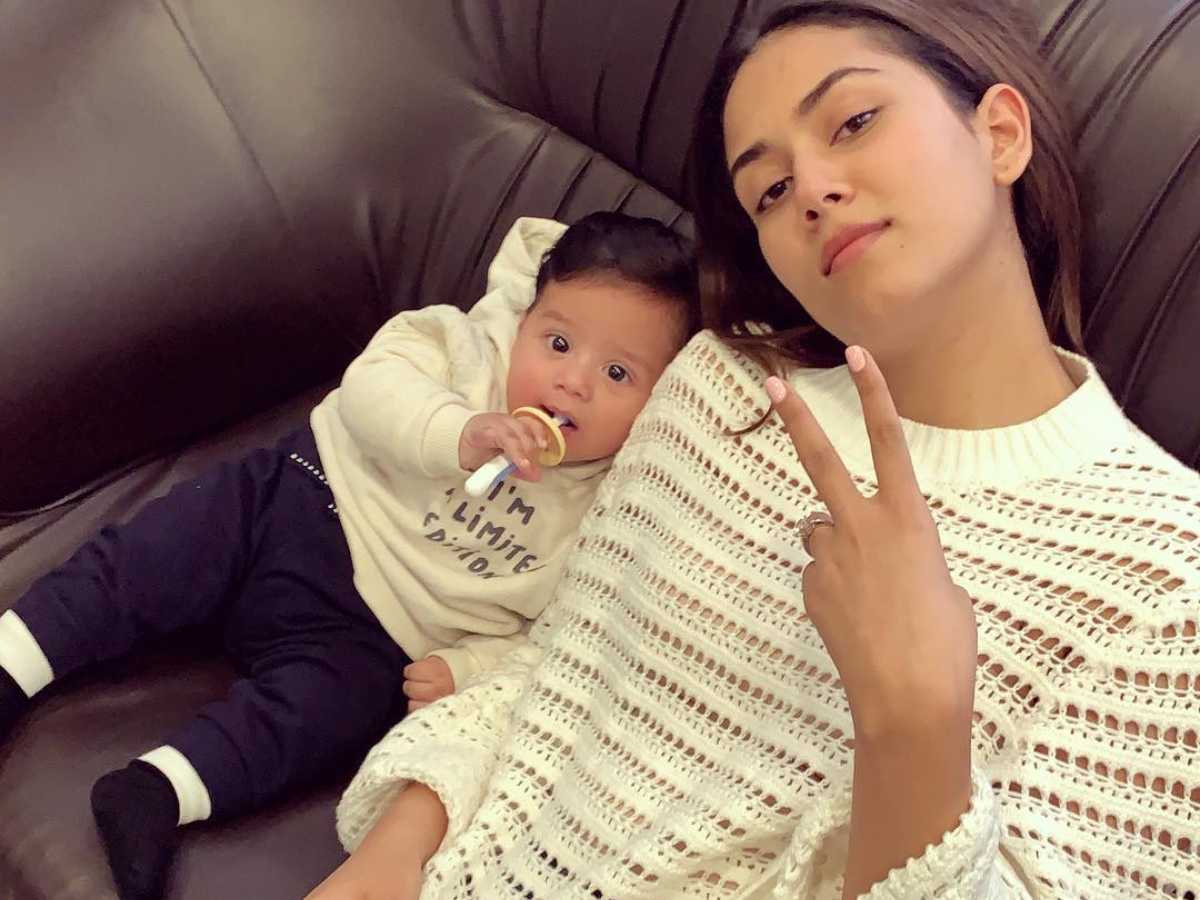 Actor Shahid Kapoor’s wife Mira Rajput took to her Instagram handle today to share an adorable picture with her son Zain Kapoor. Twining in off-white attire, the mother-son duo looks extremely charming and lovely. Both Shahid and Mira have teased us with glimpses of baby Zain on their Instagram handles earlier but this picture has perfectly captured the starlet.

Even baby Zain knows how to pose perfectly for the camera as the mother-son duo has their photo game on the point. Sharing the picture with the world, Mira captioned the image as “Limited edition, baby”. The baby munchkin is wearing a shirt with quotes reading “I’m Limited Edition”…….Read more>>